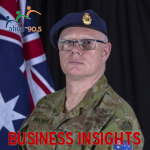 Major Andrew (Andy) Brayshaw (Retired) is an Army veteran with 43 years military service behind him. 24 of these years were spent as a Combat Medic in the British Army and the remainder as a Combat Medic and Officer in the Australian Army. Andy joined the British Army as a boy soldier in august 1977 after leaving school as a 16 year old boy. He enlisted into the Royal Army Medical Corps as an Army Apprentice where he underwent military schooling and trained as a Combat Medical Technician. He spent 16 months at the Apprentice College as passed out as an adult soldier in December 1978. On completion of Combat Medical Technician training Andy was posted to his first Army unit. Andy spent three and a half years in this unit where he honed his skills as a Combat Medic working in military hospitals, medical centres and the field. This also included several months manning a military ambulance during the UKs winter of discontent in 1979/80 when there were widespread strikes amongst the public services, including the ambulance service. It was whilst serving at 16 Field Ambulance that Andy deployed on his first OPERATIONAL tour during the Falklands War as a combat medic. During his 24 year career in the British Army Andy served in Germany, Cyprus, Hong Kong, Africa, the Persian Gulf, and the former Republic of Yugoslavia. As well as several more operational tours including the First Gulf War in 1991 and Croatia and Bosnia 1992 – 93 as part of the United Nations Protection Force (UNPROFOR), and a number of unspecified operations.

Andy rose through the ranks and was promoted to WO1 (RSM) in April 1999 undertaking two RSM positions, first with a Territorial Army Unit in 1999 and the RSM of a Tri-service Royal Naval Hospital Haslar in 2000. It was whilst serving in his last post that Andy applied to transfer to the Australian Defence Force as a lateral transfer and was accepted.

Andy retired from the British Army in April 2001 and undertook work as a college lecturer and Close Protection Officer whilst awaiting completion of his lateral transfer application. Andy enlisted into the Australian Regular Army on the 10th June 2002 and was posted to the 8th Combat Service Support Battalion, Dundas in the rank of WO2 as the Health Training Warrant Officer

.In 2006 Andy was awarded C. F. Marks Award for exemplary service and devotion to duty to the Royal Australian Army Medical Corps, the Australian Army’s version of an Employee of the Year Award In Jun 2008 Andy was commissioned from the ranks to Captain and in 2019 he was promoted to Major. Andy was medically discharged from the Australian Army in October 2020 as the result of a combination of injuries, illnesses and mental health issues that such a long military career can have on an individual.

Andy has battled with Post Traumatic Stress Disorder throughout his military career from the early days in the Falklands to the current day. Some of these bouts of depressions and PTSD have left him bitter and angry at times but with the help of his wife Anita and daughter Laura and Grace he has striven to survive and come out on top. Andy is currently writing a number of books documenting his military career and struggles with PTSD. Although Andy is no longer in the military he is not taking it easy. He passes on his knowledge and experience to others by teaching first aid and is currently setting up his own first aid training business.

Welcome to the breakthrough “LIFE: THE BATTLEFIELD” radio show and podcast series. Presented by the Managing Director of Insight Intelligence Group, ex-military and diplomatic security-intelligence services specialist and now best-selling author, MARIO BEKES Ambassador and Activist for Humanity. Everything in this radio show and podcast is drawn from Mario’s firsthand experiences. From his vulnerable childhood to his 1800 consecutive days as a combatant in the brutal Croatian civil war culminating in the forging of a new life and business in Australia. These podcasts deliver a stimulating, original, and new perspective coupled with insights, tactics, tools, and routines that you can use to live more effectively as your best self in this challenging world. Ultimately, “LIFE: THE BATTLEFIELD” talks about the most important concerns we all have. How to have hope, to cope, how to survive and thrive in 2022 and beyond. And invites you to join the conversation.